It's finally finished! Over two hours long, more variety than ever before, and most of all, it's the best album I've ever done. Obviously, I always say that, but it's true; I keep getting better. If you don't believe me, well, just listen the album, you won't lose anything even if you don't like it. 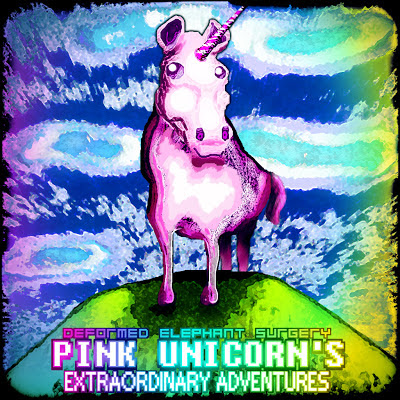 The album is divided in two "themes" and extra stuff which are re-whatevered versions of older songs and stuff that didn't fit into either of those two "concepts" that are on the main parts of the album.

Pink Unicorn's Extraordinary Adventures at the End of the Rainbow

If you want to listen before downloading, here's one song:

I'm really, really proud of this whole album, since, you know, it's so huge and stuff, and like I said, all the variety. I've never succeeded at doing anything as clear-sounding before either, so that's another thing I'm really proud of. Although some people might feel like the lack of distortion, brutality, etc. is me "selling out", it's obvious that it's not; if I was to "sell out", I'd start selling my music, you know. :P Which, mind you, is perfectly possible at some point in my life if I just get the chance to do that. But for now, it's not, so I don't care, and I do whatever I want, and right now that's stuff that sounds like this.

Anyway, some of the vocals are pretty damn distorted in a lot of songs, since my brother suggested that (probably didn't mean that much, but well... xD) and that's one of the reasons that I'm really proud of it. So it should go without saying that I couldn't have done with album without my brother, who gave ideas and helped me a lot by just that. \(ᴼᴗᴼ)/