Yeah, this album sucks for the most part, but I still wanted to upload it everywhere and shit. Isn't that how babies are made? 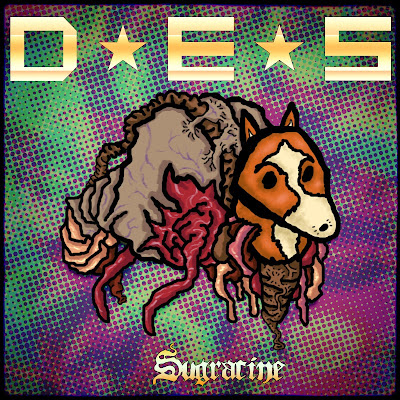 ...and I messed up the order of the songs, but I was too lazy to fix it, since I already uploaded it to Mediafire and half to Bandcamp. It was supposed to be so that "Swaglocked in a Downbeatbox" and "Necrotizing Erotogenic Chthonophagia" are the other way around, but it doesn't really matter, since they both sound like absolute shit. :P

Anyway, there will be a much better album later, not sure if this year or next, since I'm kinda slow at doing stuff that's actually even remotely good... but if you want a preview of what kind of stuff that will be, listen "Biomechanochemical Agglomeration of the Behemoths" and "SW☆G". Heaviness will vary, of course, but at least a few more songs will have kinda death metalish parts, unless I totally screw up and get tired of doing that or something.
Posted by Vlürch at 17:49 No comments:

Today, Lars woke up with his feet aching. He'd never felt pain in his extremities before, so this was a new sensation for him, a new experience to write about. You see, Lars was a writer. Not a very good one, but one who got famous by writing about hot chicks having sex with hot guys, with quite a few of his books made into pseudo-pornographic films.

”I'm probably dying,” he grunted, looking down at his toes. All mangled and red, like he'd kicked at the bedposts. Then he realised that that was exactly what he had done, he'd dreamt of muggers in a bus. He fought hard, but not hard enough, since they took all his money.

Why did he think he was dying? Well, it's simple. Little Lars was already in his late fifties, and he'd always been the type to sustain an unhealthy diet ever since he was a kid. Today, though, was very different. His feet hurt like hell, and he'd never hurt like hell before. Only little pains, corresponding with his height and body fat.

Suddenly, a fierce grope on his stomach. This was it, he was taking his last breath. What a long and painful breath it was...

Lars woke up with his feet aching. He'd never felt pain in his extremities before, or anywhere else, so this was a new and exciting sensation. You see, Lars was a fetus. Not a very developed one, but one who got famous by spending ten years too long in his mother's womb. Upon birth, he surprised and baffled doctors all over the world by being alive, having dreamt of sex with hot chicks and hot guys those long years, dreamt of writing, having films made from his writings, and had a nightmare of his own death.

Now, Lars had a shot at real life. He could make those dreams come true, and he did; He became a famous writer with films made from his books, he married a beautiful woman half his age (if the years he spent in the uterus are included) and had children. Then, one day, he got mugged in the bus on the way home. He was stabbed, and later that night he died peacefully in his sleep.

What does Lars dream of now?

...yeah, this was just a thingy that came from an idea I had, about a guy who was a lithopedion and what life as one would be like. But yeah, it's really stupid.
Posted by Vlürch at 05:25 No comments: