Sometimes, people think I'm a brony. I mean, I get it; I like colourful unicorns and rainbows, I like the emoticon :3, I come across as immature sometimes, some of my music appeals to bronies, I like anything that would make any late scene kid scream "KAWAIIIII~" from the bottom of their lungs, I often like bronies and bronettes, etc... but I don't like My Little Pony.

And yes, I've tried to get into MLP, but I just can't bring myself to watch even one episode without facepalming my palms sweatier than Eminem after hearing that MGK thinks his daughter is hot. Does that mean I hate it and every brony/bronette in existence? Fuck no.

So, if you're a brony/bronette, don't hate me, because I probably think you're one pretty cool ass awesome person.

Oh, and I know the female equivalent of a brony is actually "pegasister", but that's too much like Peg-A-Sister, which sounds like an incestuous version of Whack-A-Mole... a game where any number of female participants stand on one side of a wall with a gloryhole for each, the single male participant on the other side given freedom to insert his penis into these holes to engage in penetrative sex with the corresponding female participants, but he has to choose one. There's a timer that runs down from a number of minutes equal to the amount of female participants. If he's fucking his sister when the timer runs out, he wins and the prize is to have one of his testicles surgically removed and a literal slap on the wrist. If, on the other hand, he's fucking anybody but his sister when the timer runs out, his dick and balls will be stuffed through a meatgrinder and the word "rapist" tattooed on his forehead. His sister will then win 100 000€ in compensation for physical and emotional suffering, and each of the other participants will receive therapy/counselling because it probably hurts to have sex with a guy who thinks he's fucking his own sister.

...and now that that's off the way, moving on to another subject. I present to you, a pink unicorn with cheesy glitter nipples being molested by tentacles! (Click it for full size.) 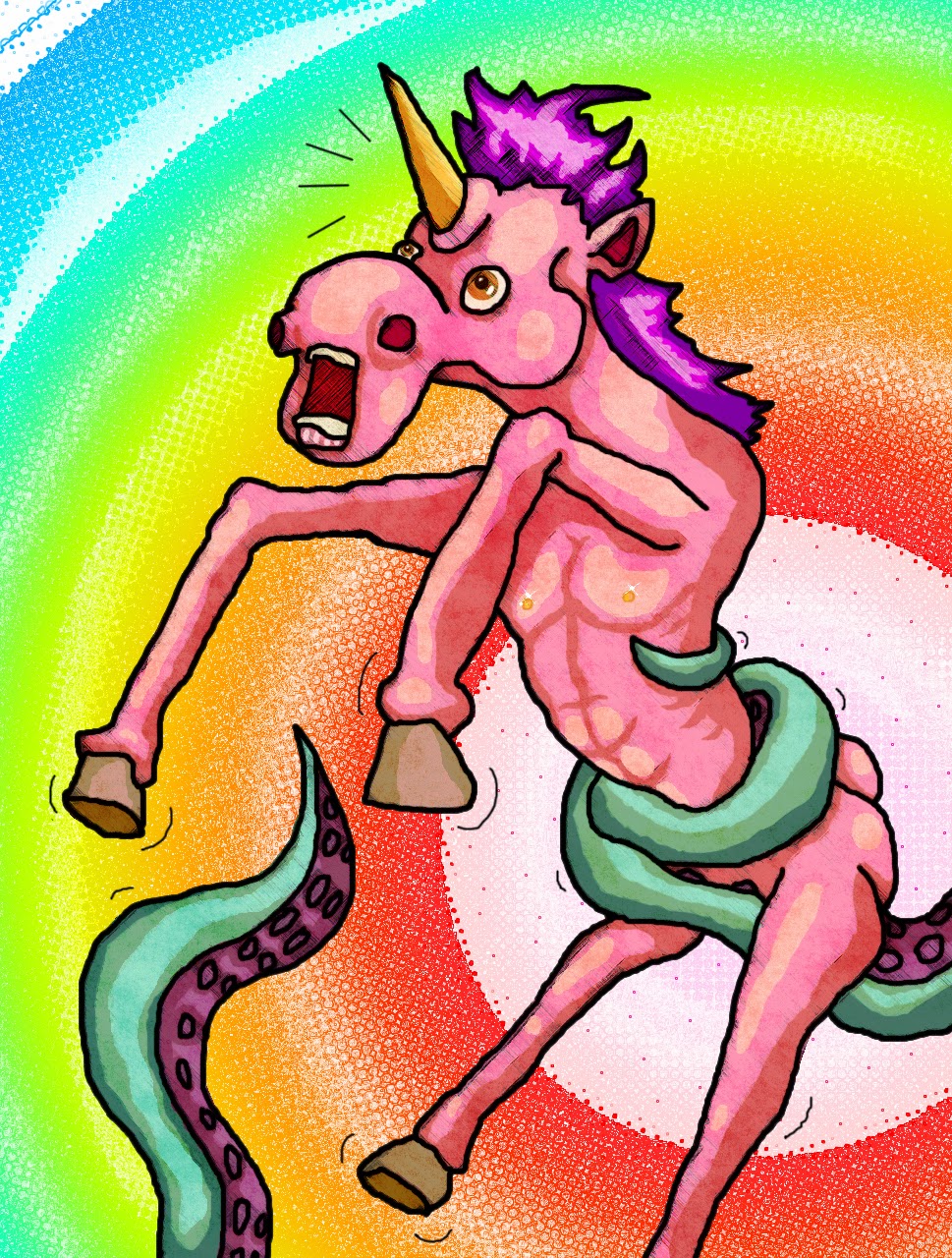 Ignore the fact that there's no tail, I forgot and got lazy... but you'll get plenty of that in just a moment, so don't get on my ass about it or anything. This is probably one of the best art-things I've ever done, so I'm really proud. I don't know if I should be, but I am.

I also posted it on Tumblr. In case it's not painfully obvious what my url is, it's vlyrch.tumblr.com because I'm imaginative like that. That was sarcasm, by the way, if someone's deaf/blind to that. I can't come up with names for things easily, and so I usually go with the most obvious, lame and boring thing ever. That applies to lyrics and song titles, album titles, etc. even more than anything else, so yeah... creativity and stuff comes naturally, but organisation... eh... not so much.

...and since it's one of my great dreams in life to find a horse and strap a dildo on its head... creating the first real-life specimen of a whole new subspecies of unicorn to-be-labelled equus unicornis phallicus... and set up cameras to record the owner's reaction, make a song with samples from his/her noises, then get someone to edit the video to be awesome with flashy effects and shit as a music video... but my balls aren't nearly big enough to do that, so I have to settle for something less dramatic and epic. A lot less dramatic. Even less epic.

It's yet another pink unicorn, only this one is... well... the most blatantly Freudian incarnation of unicorn symbolism? (Again, click to make it bigger.) 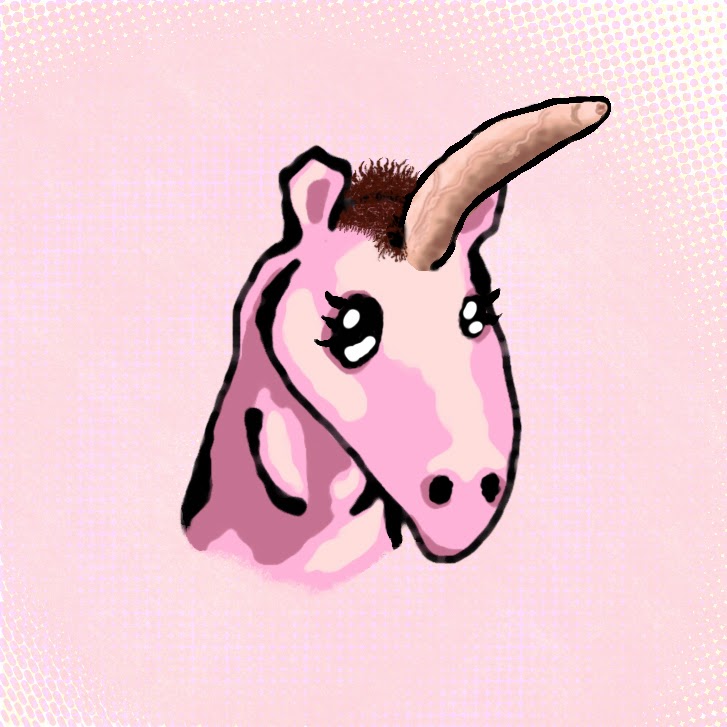 As you can see, I spent way too much time on making the penis detailed. Is that a bad thing? Does it make me a pervert? Well, let me tell you: it doesn't. Because, I mean, if I was a pervert, I'd do something kinky with a phallic unicorn. But I wouldn't, so I can't be a pervert. Not that kinda pervert, at least. Like, what kind of a sick fuck would dare touch that glorious cock? What. Did that sound as gay as I think it did? Doesn't matter. I'm not gay for unicorns, or mostly gay in general, unless we're talking about a certain guy. Or a bunch of guys, really. But I'm mostly straight, so...

And last night (or... whenever the fuck that was), I was just minding my own business, doing nothing, really, when I suddenly noticed that there had been two more "likes" on Facebook... and now, it just blows my mind. THERE ARE SIX HUNDRED PEOPLE WHO LIKE MY MUSIC. WHAT IN THE NAME OF ALL SHIT?!?!!?

THANKS, EVERYONE, FOR SUPPORTING ME!!!

Sadly, I literally haven't finished even one song since "Rushed Light Onset" yet, apart from this one and a shitty goregrind thing... oh well. I tried to make this a little more "structural" than most stuff I've done, but I'm not sure if that's a good thing or a bad thing. Either way, here's "Accidental Equine Transvection", which ended up sounding pretty cool in my own humble(?) opinion:

EDIT, 23rd of April:
Included the new version of the song, which you can download from Bandcamp for free: click here, along with the EP that it's on, "Anecdotal Equine Ballistics".
Posted by Vlürch at 20:45 No comments:

The Rescue of the Prince from the Dragon's Cave (short story)

DISCLAIMER: This isn't serious. At all. So don't try to tell me that I suck at writing or that my sense of humour sucks. I just wanted to write something intentionally ridiculously stupid.


The knight rode into the dragon's cave with his blazing lance pointed straight forward to impale this bloodthirsty devilish lizard, but as soon as he entered, the powerful tail knocked him off the saddle and slammed him against the wall.

With the man's arms firmly sliding across the organ repeatedly, the lizard felt his strength diminish by the minute. ”Please, stop! No more, I beg you! Stop, noble knight, this is not your job! I'm not really the dragon who kidnapped the prince! Please listen to me! I am the prince!” And then, the terrifying abomination turned into a handsome man, his eyes sparkling with authority. His passion was ignited, and so he grasped the knight's crotch and pulled at his scrotum. ”Let me penetrate you now that you have rescued me, just like my father commanded!”

”Your father wants you to have sex with me?”, the knight gasped in wonder.

”No! He does not approve of our love, but I am willing to go against his will if you are with me!”

”Yes!”, he shouted from the bottom of his lungs, pulled down his pants and revealed his anus for the royal baton that was still the massive size of a dragon's. ”Fuck my ass!” He fucked his ass for hours and hours, long into the night, and they had so many orgasms that they could feed all the starving children in Africa for thousands of years. Then they got married and lived happily ever after.

...don't say I didn't warn you about it being stupid. Oh, and it's not supposed to be interpreted as homophobic. Like, what the hell? How could you even think about that?! It's fucking sex between two loving men. Anyone seeing that as homophobic needs to have their politics checked out.
Posted by Vlürch at 23:17 No comments: